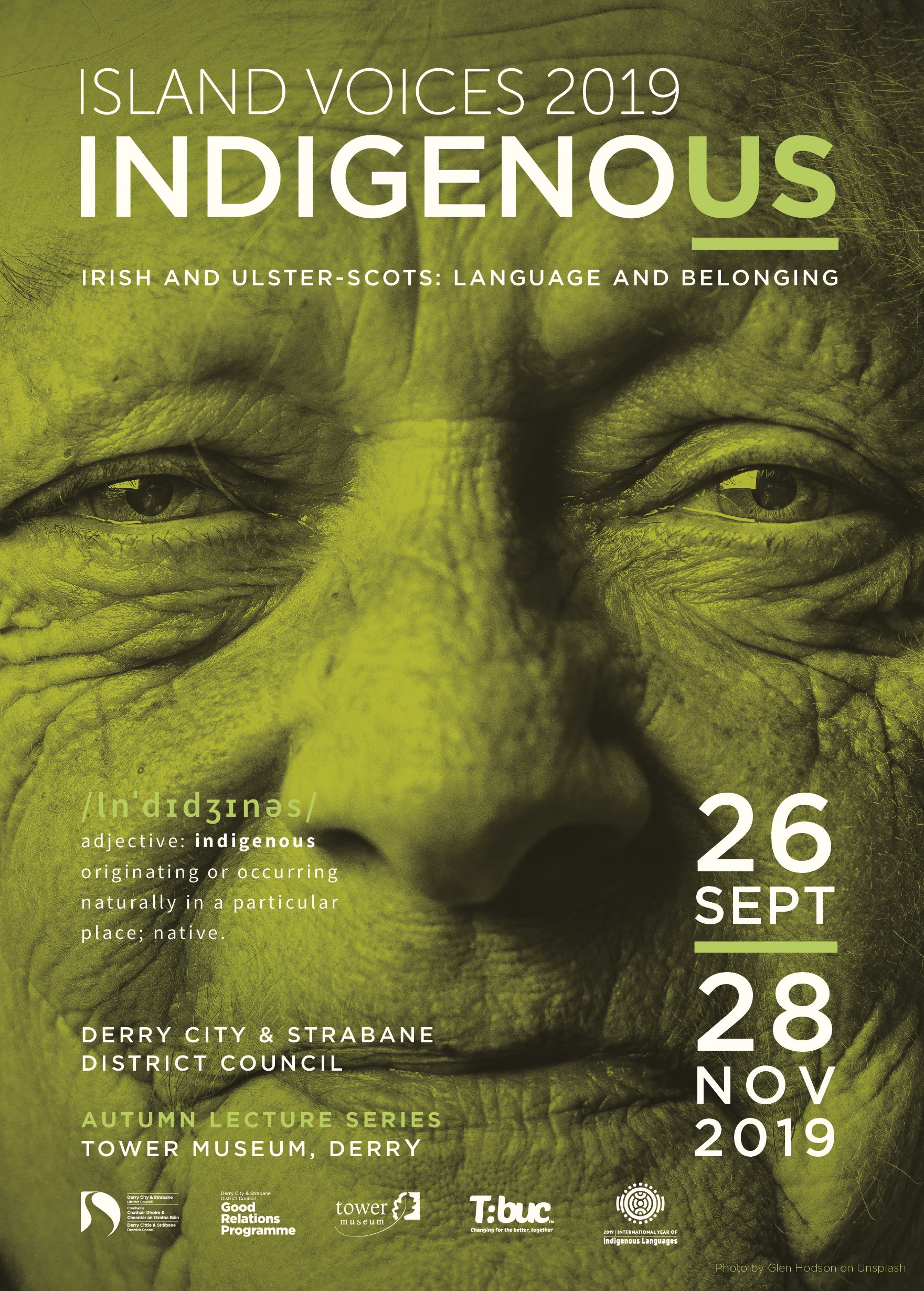 Our indigenous languages are those languages which are considered to be ‘native’ to this region; in our case, Irish and Ulster-Scots, both of which serve as a unique and time-honoured repository for our cultural identity, customs, traditions and collective memory.

Together, Irish and Ulster-Scots, represent a shared cultural wealth which tells the story of these islands; they connect people to place by creating a sense of belonging and they tell the story of all those who have made their home here.

This is a particularly special year for our regional languages: UNESCO has declared 2019 ‘International Year of Indigenous Languages’ in order to raise global awareness of the unique status held by indigenous languages and their significance for sustainable development, reconciliation and peace building.

Derry City and Strabane District Council presents Island Voices 2019 – a series of free lunchtime lectures which present a unique opportunity for us to celebrate Irish and Ulster-Scots and to recognise the important contribution they make to the shared heritage and cultural diversity of the region.

Language, Identity and the Importance of Place-Names

This lecture will consider the importance of local place-names in the context of the International Year of Indigenous Languages from a variety of perspectives. A particular area of focus will be on multilingualism: the Irish, English and Scots components in our place-names and on the interaction between these. The potential contribution of place-names to reconciliation will also be considered, as will the challenges to this in the context of a society in which language has been the subject of conflict. The lecture will draw on place-names from throughout Ireland but there will be particular reference to Ulster place-names and, where possible, to place-names in the local council area.

Mícheál B. Ó Mainnín is Professor of Irish and Celtic Studies at Queen’s University, Belfast and has a special interest in Irish and Scottish Gaelic language and literature. He is Director of the Northern Ireland Place-Name Project (www.placenamesni.org) and co-investigator on the AHRC project ‘Multilingualism: Empowering Individuals, Transforming Societies’ (www.meits.org). His research on place-names as a reflection of linguistic diversity and the role of multilingualism in conflict resolution in divided societies links the two projects. He has published on place-names, on aspects of dialectology and historical linguistics, on medieval and early modern literary texts, and on language and identity in Ireland and Scotland.

Disagreeably Scottish? – Voices of the Ulster-Scots

This talk will consider Ulster-Scots identity and how it is expressed in language and literary traditions within the north of Ireland. It will explore the influence of Scots on local language and literature, and consider responses to this over time including, briefly, some developments that followed the Good Friday Agreement. Ulster-Scots writers often operated as poets of the people, but their experiences and their allegiances were as rich and varied as their verse. The discussion will show how strongly many of them identified with Ireland at key moments in history and how they spoke to and for their communities.

Carol Baraniuk from Bangor, Co. Down completed a PhD on the Ulster-Scots poet and United Irishman, James Orr at the University of Glasgow in 2009. Her thesis was published as a monograph, James Orr, Poet and Irish Radical in 2014. She has published, broadcast and lectured widely on Scottish and Irish literature, focussing particularly on literary and language connections between Ulster and Scotland. Carol has held teaching and research posts at Ulster University and was Chair of the Education Committee on the Ministerial Advisory Group for an Ulster-Scots Academy. She is currently employed at the University of Glasgow on the project Editing Robert Burns for the Twenty-First Century and in teaching on Robert Burns.

A Social History of the Gaelic language over two millennia

It is estimated that the Gaelic language has been spoken in Ireland for around two thousand years. This lecture will examine the history of Gaelic in the context of Ireland, Scotland and the Isle of Man, plus the wider backdrop of Celtic and other languages in Western Europe. Dr Hughes will attempt to summarise the main junctures of significance for the Gaelic as a spoken and written tongue through all the various peaks and troughs in its long, illustrious – yet often turbulent – history. The interaction between Gaelic Ireland and Christianity, the Vikings, the Anglo-Normans and the Plantation will also feature in the talk.

Dr A.J. Hughes, Ulster University Ulster is a prominent scholar in the field of Celtic linguistics and literature. His doctoral thesis was study of the Gaelic dialect of the Bluestack Mountains, Co. Donegal. He has also a vast experience in dealing with the Irish language in both an international and Irish context over a period of thirty years. In 2009/10 he was Senior Fulbright Irish Language Scholar at Glucksman Ireland House, New York University where he was a Visiting Professor. He also lectured in in Irish at Université Rennes 2 in Brittany 1992-94. In addition to many books and articles (including a biography of The King of Tory) he has also translated modern Irish literature into English, French and Breton.

Island Voices is an annual lecture series which seeks to explore the languages, cultures and heritages of these islands with a particular emphasis on the Irish and Ulster-Scots traditions.

The series is funded by Derry City and Strabane District Council’s Good Relations Programme and delivered by Council’s Language Services in partnership with Council’s Heritage and Museum Services.

Please book your place by contacting

Lunch provided from 12:30pm before each talk // Admission Free