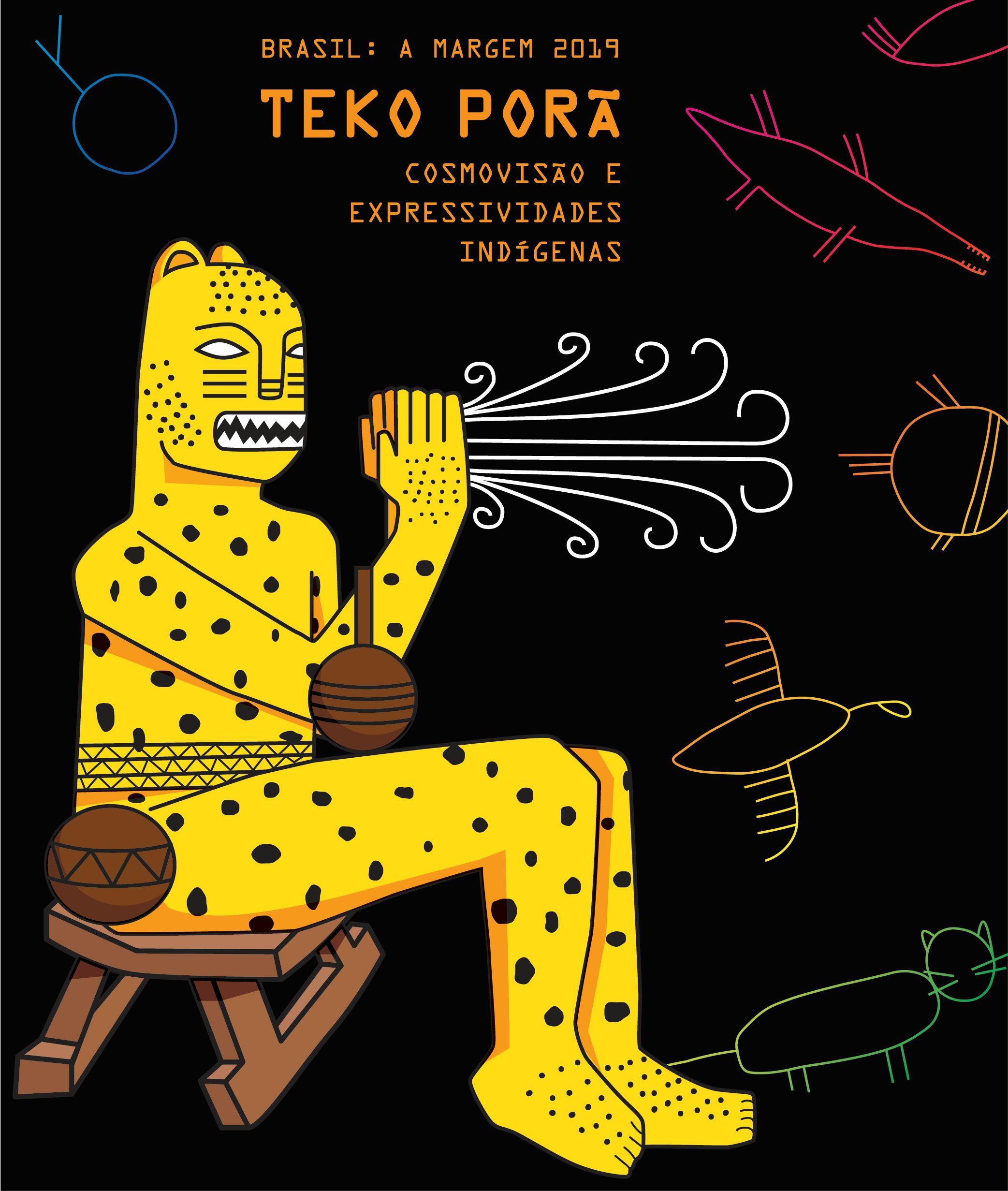 In the second edition of the project Brazil: the margin, the Centro de Artes da Universidade Federal Fluminense (Fluminense Federal University Arts Center) will be open, from April 24th to 30th, to Teko Porã, which in Guarani language means well living in the community.

The event aims to create a welcoming territory of coexistence and knowledge integration of the traditional and contemporary forms of expression of indigenous peoples, putting in evidence conceptions of art, their languages ​​and the concept of the contemporary, historically determined on the criteria of the West.
Notably in this year 2019, declared by UNESCO as the International Year of Indigenous Languages, we reiterate the words of Prof. José Bessa Freire:

“A language contains in it all the territory where it is spoken, in the means that it classifies, names, describes, evaluates, hierarchizes and gives meaning to everything in it flora, fauna, geographical accidents, enchanted and disenchanted beings that inhabit it, as well as beliefs and knowledge that reveal the relationship between them. Not only do languages ​​communicate information, but they constitute the support social practices by building discourses that establish social bonds, ritualize, tell stories, sing, fight, love and contribute to creating communities that are formed with this sympathy”.

In the diversified program, offered to students and society in general, the richness of indigenous cosmology and expressivity will occupy the spaces of the theater and the cinema, art gallery, photography gallery, balcony and gardens of the Rectory, offering debates, workshops, exhibitions, theater, music and cinema shows. In general programming, the activities to be performed at the UFF Theater will be open to the interested public, teachers of the municipal and state education network and the student community.

The conferences and courses will be accessible in LIBRAS (Brazilian Sign Language), with previous registrations and the right to certification as a listener.

Daniel Munduruku (from Mundurucu indigenous people) was born in Belém, Pará, and is one of the most important and well-known indigenous Brazilian writers. His work of spreading the indigenous culture in children’s and adult literature are relevant to face prejudice and ignorance about this universe. He has won several prizes, as Jabuti (Academia Brasileira de Letras) and Tolerância (UNESCO) and he is the Director-President of the Uk’a Institute – Casa dos Saberes Ancestrais (House of Ancestral Knowledge). Denilson Baniwa (from Baniwa indigenous people), was born in Rio Negro, in the interior of the Amazon. He is a visual artist, illustrator and designer.

Edgar Kanaykó Xakriabá belongs to the indigenous people of Xakriabá, from Minas Gerais. He is student of Anthropology (Master’s degree) at UFMG – (Federal University of Minas Gerais). He acts in the field of ethnography: “a means of recording one aspect of culture – the life of a specific people”. Under his lenses, photography becomes a new “tool” of struggle, enabling the “other” to see with another look the indigenous people.

Free, with previous registration and certification.

14 p.m. – 15:45 p.m. Minicourse: ASCURI – Ñandereko e cinema indígena de direção (ASCURI – Ñandereko and directing indigenous cinema). Short film session of indigenous filmmakers. Ascuri filmmakers will talk about the relationship of the indigenous way of being and how they conduct and teach the audiovisual in villages, with emphasis on the importance of collective direction. Free, with previous registration and certification.

4p.m. – 6p.m. Minicourse – Narrativa Visual Cinematográfica: a visão guarani (Visual Narrative Film: the Guarani vision) Speaker:  Alberto Álvares, professor, filmmaker of documentaries and photographer of the Guarani ethnic group.The filmmaker will approach the narrative from the Guarani perspective – from and in the cinema, from his experience. Free, with previous registration and certification.

Brisa de La Cordillera Flow is a Chilean / Brazilian singer who mixes latin music with rap, electronic and neo / soul. Her show has repertoire based on her debut album “Newen” and her new work “De La Cordillera Lives”, which presents her songs with performances mixing analogue and electronic instruments. The artist, better known as Brisa Flow, justifies the vulgarity by having a free musicality that flows with her compositions that sonorize themes related to the experience of women and the social inequality present in Latin America.

From the tupi-guarani dialect, Arandu means a mixture of wisdom and knowledge. The idea of ​​this storytelling is to carry the public through a poetic walk among the Amazon legends, to an ancestral Brazil that brings in the oral narrative the vehicle of culture perpetuation.

10a.m. – Projeto Cine Escola (Cine Escola Project): Children’s animation shows + Animation Workshop with Daniele Rodrigues Daniele Rodrigues, educator, will address in her speech the work in the development of animations about the indigenous culture realized with her students and their importance as a pedagogical tool. She will also present the fundamentals of animation in an interactive activity. Free, with previous registration and certification.

Eliane Potiguara is a writer, a poet, a teacher, an activist and an important indigenous leader with fundamental participation in the elaboration of the UN Universal Declaration of the Rights of Indigenous Peoples.

Renata Machado, journalist and co-creator of Rádio Yandê, founded in 2013 in Rio de Janeiro, with the aim of conceiving a collective space so that indigenous people from various parts of Brazil could be protagonists of their own history.

Free. Passwords distribution at the box office 1 hour in advance.

The artist and curator presents a panorama of indigenous art since graffiti to the contemporary art, pointing out the importance of these expressions in indigenous resistance.

Denilson Baniwa, articulator of digital culture, illustrator, art director, communicator, web activist, graphic artist and indigenous rights activist. With Anápuáka Tupinambá and Renata Tupinambá, he is also one of the coordinators of Radio Yandê, founded in 2013, with the mission of spreading indigenous culture outside the villages with the help of the speed, the reach of technology and the internet. Free, with previous registration and certification.

Conference Mediator: Renata Machado Davi Kopenawa, leader of the Yanomami people, was born in Alto Rio Toototobi, in Amazonas. He is a writer, xamã, spiritual leader and one of the main voices of the world in defense of forest people and life. Nowadays, he is president of Hutukara Yanomami Associação, an indigenous entity of mutual aid and ethnodevelopment. Kopenawa received the Global 500 Award from the United Nations (1988), the Right Livelihood Award (1989), and special honorable mention of the Bartolomé de Las Casas Prize (Spain) for his fight in defense of the rights of the Americas’ native peoples.